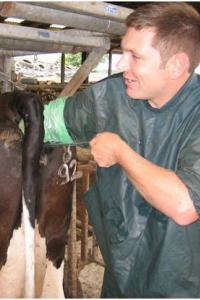 Tony Kemmish essentially lives and breathes cows.  Principal of an expanding mid Devon mixed practice he spends his life immersed in the day to day intricacies of dairy farming.  He qualified from Glasgow Vet School in 2002 and headed home to the West Country and St Boniface Vets.  After 5 years as an assistant he took over the practice in 2007.
Tony holds the general practitioners certificate in Dairy cattle practice and the Diploma in Bovine Reproduction.  He is passionate about herd fertility and its fundamental link with nutrition. One of his long term aims is to promote efficient and profitable production through educating farmers about the cost of disease - particularly poor fertility and mastitis.

In his spare time he likes to spend time with his wife and young family and their small herd of South Devon cows. 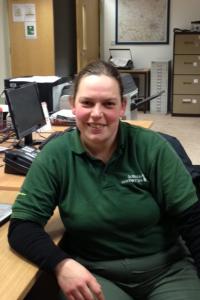 Having graduated from the RVC in 2008, Ruth worked in farm animal practice in Somerset and Dorset before joining St Boniface in 2010. She is passionate about working with the farmers to reduce the impact of disease on their herds, believing that a healthier herd will be more profitable and easier to manage.

Ruth is a trained DairyCo mobility mentor, so if you have a lameness problem on the farm, she is happy to work with you to find the solutions.  Being a DairyCo Mastitis Plan registered user she is keen to investigate mastitis and cell count problems; to read a recent article on targeting environmental mastitis pathogens please click the link.  Other areas of interest, involve sheep work and improving flock performance.

Because she always likes a challenge, from January 2014, Ruth enrolled on the RCVS certificate in Advanced Veterinary Practice (Cattle) with the aim of providing an even higher level of service to our clients.

Outside work Ruth is a keen walker so is delighted to be working close to Dartmoor. 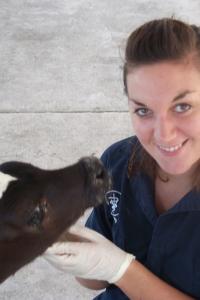 Danielle qualified from St. Georges University, Grenada, in 2009 after a final year at Edinburgh Vet School. She then entered mixed practice back home in Lincolnshire, predominantly doing small animal and farm work.

After two years, she decided to steer her career towards farm animal practice by taking a position at the University of Florida Vet School in the Food Animal Reproduction and Medicine Service (FARMS), where she worked closely with highly regarded professors and diplomats. It was here that she developed a specific interest and enthusiasm for calf rearing and replacement management which she is keen to continue here at St. Boniface Vets.

Outside of work, Danielle enjoys playing the piano and is a keen tennis player.

Danielle is currently on maternity leave, after the birth of her twins in September.

Ingrid Bijker has worked in the area since graduating from Ghent University in 2004.She is passionate about cows and joined St Boniface in 2013 as a member of the farm team.

To enable her to provide farm clients with a better, more specialised service, she decided to study for the Diploma in Bovine Reproduction (DBR), which she completed in 2012.

She is committed to providing specialist veterinary care to cattle, aiming to help herds become healthier and more profitable.  Herd health, fertility and mastitis are areas of particular interest and she also gets involved in bull fertility testing.

She enjoys travelling and hiking with her family. She also likes windmills, clogs, tulips and cheese and has 2 cats. 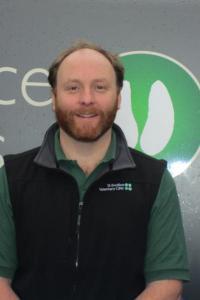 Having graduated from the University of Bristol in 2003 Chris started out ‘James Herriot’ style as a mixed vet in North Cornwall. A job offer, as a fulltime farm vet, tempted him away from the West Country for a busy 4 year spell in and around Cheshire.

Cheshire cheese was no substitute for pasties, so the draw of the Westcountry found him back and settled in Okehampton since 2008. When heading west, once more, the desire to cross the Tamar was strong, as Chris was born in Truro and he had a wonderful childhood in West Cornwall; however, hikes on Dartmoor are slowly convincing him Devon is not too bad!

Professionally, Chris enjoys the variety farm vet work throws at him and has particular interests in calf rearing, fertility management and cattle lameness prevention. Chris was in the first cohort of trained DairyCo Mobility Mentors and sat on the NACFT (www.nacft.co.uk) committee as their vet liaison for 8 years.

Home life is dominated by taming his two young daughters and as a consequence he is developing an encyclopaedic knowledge of Peppa Pig and cake recipes. Any spare time is dedicated to rambling in the glorious Devon countryside. 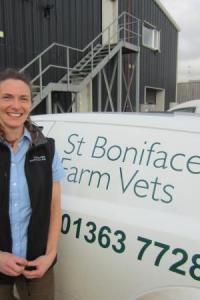 Rachel was brought up on an arable and pig farm. Graduating in 1997, her first job was in mixed practice in West Devon, before moving on to teach students in the farm animal practice of Bristol vet school, whilst studying for her post graduate certificate in cattle health and production.

She then moved to New Zealand, to work as a dairy vet for over two years, at the internationally known Animal Health Centre, in the Waikato, where she was also involved in clinical trial work.

On returning to Britain, she set up a new branch of a farm-animal-only vet practice on the Devon/Cornwall border in August 2006.  Starting with no clients, this then grew to a nine vet practice in which around 80% of the vets’ time is spent on dairy work.

She joined St Boniface in 2015 after she and her husband, Richard, got a tenancy in Brampford Speke. They have converted a sheep and arable farm into a dairy unit and will be milking about 280 cows within a few years.

Vet work, dairy farming and two small boys keeps her busy enough but she does manage a bit of swimming to keep fit. 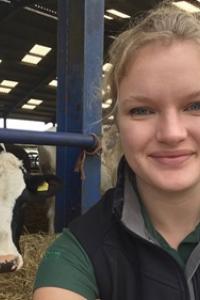 Having graduated from the University of Bristol in July 2017, Charlotte chose to stay in the South West for her first experience as a farm vet.

She particularly enjoys working with dairy cows, and is keen to get involved with all aspects of farm animal work.

In her spare time, Charlotte likes being out in the Devonshire countryside; either running or walking with puppy, Twix and can be persuaded to try most sports (at least once!). 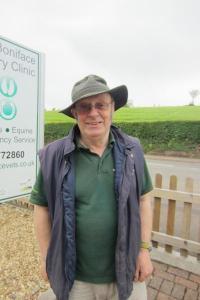 Sylvie moved to Crediton in 1976, after qualifying as a Veterinary Surgeon in 1970.  He became Partner of the clinic in 1982; working together with Mr Reakes.

Following a period of 8 years, Sylvie bought the practice, until Tony became the owner in 2007.  Originally he was involved in large and small animal work, but now concentrates on the Farm and Equine side of the practice on a part-time basis.

Before becoming a veterinary surgeon Sylvie was a pilot in the Irish Army Corps.