...you probably knew that already but it is always useful when robust research backs up common sense and more importantly allows us to quantify the problem.

In the next few articles, we are going to run through:-

The study was coordinated by an internationally respected researcher (Scott McDougall) and involved over 500 cows across 61 herds in 6 European countries involving all main dairy breeds. It always feels more reassuring to have large ‘hometurf’ studies, sometimes conclusions are drawn in from small studies on high yielding Holsteins under super intensive conditions; that is certainly not the case here.

Farmers enrolled and treated the cows themselves, cows needed to be in the first 3 months of lactation with just one quarter affected by mastitis. Cows were treated with the same antibiotic protocols and three samples for laboratory culture taken: pre-treatment, 2 weeks and 3 weeks after treatment.

The cows were also allocated randomly to receive either Metacam (non-steroidal anti-inflammatory drug i.e. NSAID) or a placebo (a similar looking injection without the NSAID or any other drug in it). It is important to have placebo groups in research, they allow us to accurately tell what effect the drug being tested has and reduces bias.

Bias in this context is the natural tendancy in research to want to see a positive effect, if we give an extra treatment to an animal subconsciously we tend to score any outcome more positively…..who would have thought research shows farmers are naturally optimistic!

By masking which cows receive the real drug we can be more certain the outcome is down to the drug effect only.

Click here to read part two - What happens to the fertility of cows with mastitis? 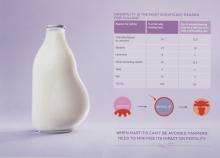